Brutal Gamer’s review of Brave Hedgehog, a children’s board game, for the iOS.

As a parent with an affinity towards technology and video games, I enjoy sharing my hobbies with my children when I can. I have 3 boys of varying ages: 13, 5, and 2, and when it comes to video games their interest and skill levels vary greatly.

While not all of them have mastered the hand-eye coordination that is sometimes required of console-based games and a somewhat imposing multi-buttoned Xbox 360 or PlayStation 3 controller, there is one device that all three of the boys have mastered: the iPod Touch.

When it comes to PCs, I’m a Windows guy, but it’s hard not to see the ease and brilliance that Apple has brought to the mobile technology market. Devices like the iPhone have undeniably revolutionized what we can do with our telephones, and the addition of iPod Touch and iPad devices have made education and entertainment as easy and accessible as the iPhone without having to sign a 2-year contract.

The Apple App Store has an amazing amount of fun and educational games, thanks to companies like Family Dreams, that try to make learning and playing on devices like the iPhone and iPad easy for all ages.

Brave Hedgehogs is a children’s board game designed for the iPhone, iPod Touch, and iPad. It is a simple-to-play game that doesn’t have a lot of rules to remember, but it does require the ability to read, or at the very least, recognize numbers.

For this review, I sat down with my two youngest children, ages 5 and 2, in hopes of getting their opinion the game. 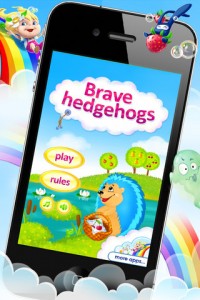 We all agreed: starting a new game of Brave Hedgehogs was very easy to set up. Once the application loads up, the only two real options on the menu were “Play” and “Rules.” Between the two kids, my 5-year-old is the only one with any sort of reading comprehension, but both boys have grown accustomed to identifying the “play” button on other applications. (They’re smart kids and can usually figure out how to start up an application through trial-and-error at the very worst.)

Brave Hedgehogs is designed for 2 or 3 players. There is no wireless multiplayer using multiple devices; this is a shared-device experience where each player takes a turn and then passes the device to the next. The more technically sophisticated family, who requires complex setup where each child has their own device, need not apply. This is an iPhone application with a “let’s all gather around and be in close proximity to each other” family board game feel, and I like that.

Each player takes turns by spinning a colorful wheel to determine the number of spaces they can take. The spinning wheel is easily spun by swiping your finger in pretty much any direction.

Like most board games, the choices on the spinning wheel are simple: you can move forward 1, 2, or 3 spaces, or fall back one space. There is also a Question Mark space, which if landed upon, will let you choose one of two different move options. If your spin lands on the ghost, your hedgehog will lose a turn, unless they’re wearing the sunglasses power-up (more on that later).

Unless you land on the -1 or the ghost, players will have to manually move their hedgehog the correct number of spaces. Alternatively, landing on the -1 or ghost will automatically perform that move for the player. 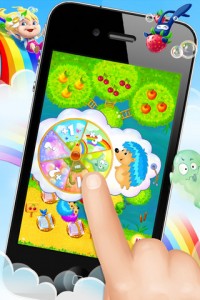 When not in use, the spinning wheel is hidden off to the left side of the screen. When it is a player’s turn to take a spin, the tassel on the spinner’s pull-tab will move, indicating that somebody needs to slide out the spinner and give it a whirl.

Determining whose turn it is, is easy to figure out. The active player’s hedgehog will shift around slightly on the gameboard, while the inactive hedgehog(s) will remain motionless.

The objective of Brave Hedgehogs is to work your way from the start to the end, where you’ll collect fruit. Each hedgehog collects a unique fruit, like pears or apples (or in a 3-player game, cherries). Once you make it to the end point, your hedgehog will walk over to the group of fruit. You must then return to the starting point, and drop off your fruit in a basket. The player who can do this three times in a row is the winner.

While some games are designed to be easyily figured out, they sometimes inadvertently become complex in their simplicity. This was the case with Brave Hedgehogs. We came across a couple of frustrating situations where we didn’t know what to do next. When the first player made it to his collection of fruit, we watched as the hedgehog approached the fruit and appeared to begin eating it. We waited. And waited. And waited. The hedgehog still seemed to be eating the fruit and nothing happened. At first, I thought the game had locked up, but I was still able to pause the game. Eventually, one of the three of us, started swiping around the screen at random until we realized we had to manually move the piece of fruit on top of our hedgehog. At that point the hedgehog accepted the fruit and turned around ready to return to the starting location. Problem solved, but without a little bit of head scratching.

The game has power-ups, like a jetpack and a pair off glasses. If a player lands on the jetpack, it’ll immediately sent them to either the endpoint or the starting location, depending on whether or not they are holding a piece of fruit. The glasses will protect the player’s hedgehog from losing a turn when their spin of the wheel lands on the bad ghost.

Overall, the boys enjoyed the game, and I found myself having a good time playing the game together with them. I recommend checking this application out to any parent who has young kids. While it might be designed for my 5-year-old more than my 2-year-old, if you sit down and play with them, they’ll probably have a good time.

Brave Hedgehogs is an edutainment board game app designed for kids in mind. It is a universal application that is playable on both the iPhone/iPod Touch, and is available from the Apple App Store for $1.99.

2-3 players can play together using the same device. Each player takes turns trying to help their brave hedgehog move from the beginning of the board to the end three time to be the first to collect all of their fruit. The rules are basic, and the gameplay is simple.

The game is minimalist with an effort to keep it easy for kids, however the lack of explicit instructions sometimes made figuring out what to do next a little confusing. Thankfully, my 2 and 5-year-old kids help me figure it out.

I recommend giving it a shot. My kids enjoyed it, and while it’s not as action packed as Angry Birds or Cut the Rope, it always feels good to sit down and play a board game from time to time — even if it’s a board game on an Apple mobile device.

Reviews on other applications